A NUMBER of East Tilbury residents have expressed their “concerns” after Gypsy-Travellers moved into the East Tilbury area.

A large number of caravans moved in at just before the weekend near to Coronation Avenue.

A number of residents have expressed their concerns over alleged anti-social behaviour.

One resident contacted the police on Monday afternoon regarding an incident.

Essex Police attended but according to a spokesperson could not find any evidence of an offence.

The situation has created a blizzard of comments, observations, invective and tension with some residents using highly inflammatory language to make their point. 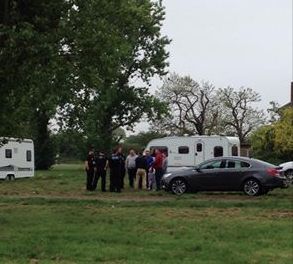 As the caravans are on private property, resident have contacted their local councillor, John Purkiss and asked him what they could do.

Cllr Purkiss said: “There is not an awful lot I can do. It is down to the landowner to have the papers served, after which it could take up to ten days for them to leave.”