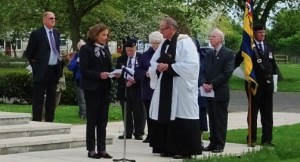 FAMILY members, dignitaries and members of the public gathered at the East Tilbury Bata war memorial for a re-dedication service on Sunday (April 28th).

The Bata War Memorial was restored to its former glory in the latter part of 2013 in time for the Remembrance Day services. This involved a complete deep clean, repointing of the granite blocks, new paving and steps as well as new granite plaques. These plaques show the names of 81 Bata employees who died during the Second World War.

A number of families of those named on the plaques were traced and some were present for the service.