INTERNATIONALLY renowned Queen tribute band The Bohemians will be in Grays on their new tour, with new costumes, a new production, a new set, and ready to take you back to the early 70s.

Remember when Bohemian Rhapsody was Number One (the first time) and Queen played the Legendary Hammersmith Odeon show as shown on the BBC Whistle Test programme?

Remember the long hair, the big winged shirts, even the harlequin leotards of 1977?

The Bohemians take you back to the decade that taste forgot.

Move on to 1979, The Crazy Tour, deemed to be one of Queen’s most exhilarating performances when the band hit the peak of their live performances.

The red, skin-tight PVC trousers, Fat Bottom Girls and Don’t Stop Me Now ringing out – a crazy live performance to take you to the end of an exhilarating first half of the show.

The second half celebrates Queen’s most successful and famous tour – The Magic Tour. How can anyone forget the classic yellow jacket and the massive hits such as, A Kind of Magic, I Want to Break Free and One Vision.

The Bohemians then celebrate Queen’s triumphant Live Aid performance from 1985, and re-create the 1986 show, ending in grand style and pomp as you would expect from any of Queen’s magnificent live performances.

The Bohemians are performing at the Thameside Theatre, Grays, on Saturday, 10 May at 7.45pm – A Night Of Queen with The Bohemians 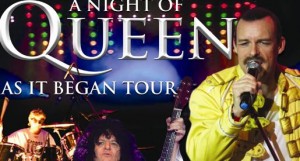