ALL across the borough, there are examples of councillors, both Labour and Conservative, working well as a team. The Tilbury St Chads duo of Steve Liddiard and Lynn Worrall are a case in point. Lynn has her grass roots credentials as well as a much more analytical mind than she is given credit for. Steve is, and has become, “The Honorary Tilb” and as you can see from his interview, deeply cares for his residents. 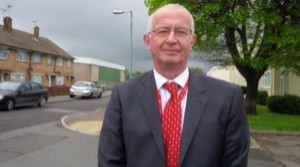 It is clear that there is a lot of case work and a lot of commitment needed. His critics might say that Steve still thinks more like a council officer (he was one for forty years!) and less like a politician. Others will say, that, down in Tilbury, you need someone who knows their way in and out of the bureaucratic maze of council life in order to get things done.

In non-general election years, the Labour vote has been pretty constant in this ward. In 2008: 519, 2012: 592. There has been spikes in favour of parties such as the BNP and this may give parties such as UKIP a chance of impressing. Will they impress this year? There is a big poster on the billboards but you get the feeling that they may have more of a chance in the other Tilbury ward.

The Tories have to concentrate their resources but the MP, Jackie Doyle Price spends a lot of time down in Tilbury and you wonder if there is a case for having a “proper-go” one year.