THE Shadow minister for Culture, Media and Sport, Harriet Harman MP visited the High House Production Park (HHPP) on Tuesday afternoon. Flanked by the leader of Thurrock Council, cllr John Kent as well as Thurrock MEP, Richard Howitt and prospective parliamentary candidate for Thurrock, Polly Billington, Ms Harman was given a guided tour of the park as well as sitting in a number of presentations by the partners in the park. 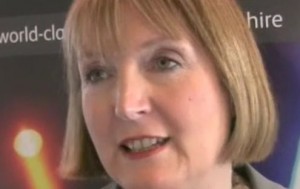 Afterwards, YT spoke to Ms Harman on a number of issues including her impressions of the HHPP. As the deputy leader of the Labour Party was about to go on the campaign trail in Purfleet, we asked her what issues she was hearing on the streets of Peckham and expected to hear in Purfleet.

Finally, in her role as shadow culture minister, YT asked Ms Harman whether Labour, if they regain power in 2015 would, as the coalition has, plough millions into Local TV. A medium, which, according to reports have had low viewing figures