Rylan is bringing his Elephant Parade to Lakeside

THURROCK’S very own Celebrity Big Brother winner, Rylan Clark is to join the Elephant Parade national tour. His design for a new elephant statue will join the intu-presented national tour when the elephants arrive at intu Lakeside on 5th May.

The elephants arrival at intu Lakeside will also mark the launch of a 90-day online auction. People can bid on a tour elephant or simply make to pledge to the Asian Elephant Foundation via the tour website: www.intuelephantparade.co.uk/elephants

Rylan’s much anticipated elephant statue ‘Sparkey’ reflects the personality and character of his design. He has joined forces with silversmith Cath Adam to translate this on to a full size Elephant Parade statue. Sparkey will stand alongside the work of other celebrities including Claudia Schiffer, Alex Jones, Mercy Delta, Pete Fowler and Union J – as well as the vibrant creations of school children from around the UK.

The Elephant Parade national tour is presented across the UK by intu, owner of many of the UK’s best shopping centres. intu has made possible the concept of a first ever national tour for Elephant Parade (www.intuelephantparade.co.uk). A national tour with local flavour, the tour elephants draw on artistic designs from all corners of the UK and in addition to the touring elephants, more than 8,000 designs for a first ever digital show reel have been created by members of the general public – setting a new Elephant Parade record for the level of direct participation in one of its public art expositions. 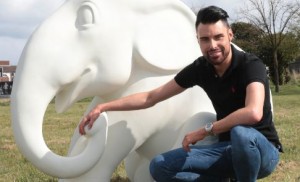 Rylan Clark, former Celebrity Big Brother winner and X Factor finalist commented: “I am well excited to be taking part in such a great cause. I’ve always loved elephants and it was so much fun designing my very own statue. I can’t wait to see it when it arrives at Lakeside, I’m sure it will stand out from the herd! I’ve been telling everyone to go and create their own design, the more people we get involved the brighter the future of these beautiful beasts.”

intu Lakeside customers will have the chance to meet Rylan in the centre on Monday 12th May by entering a competition via their Facebook page.

Izzie Peskett, Marketing Manager at intu Lakeside said: “This UK tour has been dubbed ‘the people’s parade’ in response to the scale of public engagement with the elephant statues as they tour our centres around the country. For this reason it feels right that we have a Celebrity Big Brother winner taking part – a show that that has such a big reach on a national level it fits nicely with the intu tour, which is also engaging people from all walks of life. Having support and a guest appearance from Rylan takes this tour to the next level and means we can reach out to even more people to raise awareness of the plight of the Asian elephant. We’re looking forward to seeing the public’s reaction to the new elephant design which will be unveiled at our centres this spring.”