As you can see from our film, Rylan was overcome with joy at seeing for the first time, the completed version of Sparky.

Designed by silversmith, Cath Adams in consultation with the X Factor favourite, Sparky and the elephant parade is the world’s largest open air art exhibition of decorated elephant statues that seeks to attract public awareness and support for Asian elephant conservation

Created by local and international artists, each elephant is a unique piece of art

After the exhibition tour, most elephants are auctioned and proceeds go to the Asian Elephant Foundation, supporting the Asian elephant which is threatened with extinction

The parade concepts have made it possible to generate funds for projects varying from elephant hospitals and restoration of land to lobbying governments and undertaking research. To date, many Asian elephants have been saved and cured but there are still thousands more that need to support of the general public.

Whilst looking at Sparky, Rylan took time out to speak to fans and have his photograph taken.

As their was such interest in the likeable star, Rylan was whisked away to a quiet corner of Lakeside for a few words with YT. 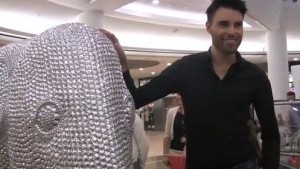