UKIP march into final week with Day of Action in Thurrock

WHEN you are hot, you are hot and in a warm and balmy day in Thurrock, the massed ranks of UKIP continued to campaign for the local and european elections on Thursday May 22nd.

They have clearly targeted Aveley, Ockendon, Belhus to name just three wards as they fight to add to their one councillor in the council chambers.

Some sources think the UKIP tally could be as high as five. Labour clearly looked worried in Belhus as they frantically campaigned at the weekend.

The support they get on the street is significant. Whether they have the ability and political infrastructure to get people out on Thursday and vote is another matter entirely.

MEP candidate and Aveley resident, Tim Aker looked in positive mood as they concentrated on the Derwent Parade area before they headed off to the four corners of the Thurrock constituency.

It all makes for a fascinating final five days. 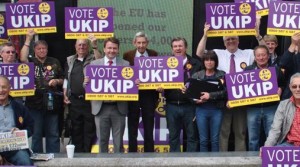