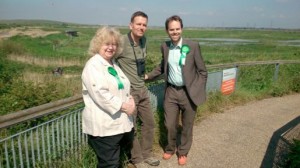 AS the elections approach, and with a few days to go, there’s still a chance for you to decide to vote green. After he visited Thurrock last week, I want to convince you why voters should put a cross next to the green party and choose Rupert Read (Lead candidate) as your MEP.

‘Yes we can and yes we will win’ is Rupert’s response to the recent polling [1] that suggests The Green Party will gain 12% of the national vote, and 14% in the South. The European Elections give a bright future for the Green Party. These are elections held under a proportional system, that allocates seats on the percentage of votes throughout each region, not based on the person with the most votes. That percentage would return the green party 6 seats nationally, triple the current number of MEPs they hold, having had an MEP in London and the South East since 1999.

Indeed, it all looks overwhelmingly positive for the Green Party. With 2 Green Councillors gained on Essex County Council last year, people are choosing to vote for the real alternative to tired politics from the rest of the parties. So what do they offer?

In simple terms, a Europe that works for the common good. In a hilarious party broadcast [2], the Green Party promised to work hard in Europe, as they have done in the past 16 years.[3]

More specifically, the Green Party promises a Referendum on Europe, where they would urge voters to vote yes to a reformed Europe that works better for people. They argue that the only way to do this is to have MEPs, like Rupert, who will work hard to reform it before we decide whether to leave. They will oppose the Transatlantic Trade Investment Partnership deal, which many have cited [4] [5] as a dangerous threat to our democracy.

They are committed to fighting fracking for shale gas, with representatives from the party across the country arrested (and released without charge) for their participation in protests against it. [6]

They want decisions to be made at the lowest possible level, and promise to keep Britain out of the Euro. They want to renationalise our industries, including our rail (one which lead candidate Rupert Read is passionate about, serving as the Green Party’s transport spokesman). For the General Election in 2010, they produced a fully-costed manifesto to show the voters that it was all possible.

And of course, they will continue to battle climate change in the arena where it is most successful – the international arena, with their representatives sitting in the fourth largest party grouping in the European Parliament.

Sound good? Why not check out their manifesto [7]? If you are tired of the same old politics, why not use your vote on Thursday not for a party that breeds xenophobia (for a perspective on this from Green Party Leader Natalie Bennett, view this article [8]) and continually votes no to every measure put before them in Parliament, if they even decide to turn up (See the voting record of Leader and Deputy Leader Nigel Farage and Paul Nuttall here [9] [10]) and vote for the real alternative in British Politics.

Your vote for the Green Party will count on Thursday. They narrowly missed out in 2009, and with the loss of the Liberal Democrat vote likely to occur, as well as an inevitable loss of votes for the Conservative Party due to them being in Government, their votes will rise high enough for them to win.

Vote Green. For the Common Good.

Share
Facebook
Twitter
Linkedin
Email
Print
Previous article
Man cut free from car after crash in Port of Tilbury
Next article
Prime Minister David Cameron on building more homes: “We do need to get on with it”