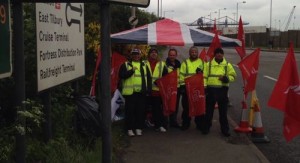 A MOVE by management of SCA Logistics, based at Tilbury docks, to be competitive by introducing zero hours contracts, is the subject of a two day strike by militant trade unionists.

The dockers, members of Unite, the country’s largest union, started a 48-hour stoppage at 06.00 (Tuesday 27 May) in the dispute which the union fears could see the permanent workforce being replaced by more competitive workers on zero hours contracts.

Unite regional officer Jane Jeffery said: “If this is allowed to happen, we will be turning the clock back 50 years to the bad old days when you had to rely on the tap on the shoulder to see if you had work for the day in the docks.

“Only today, the call will come on your mobile – but the culture will be the same, low waged and insecure employment. Wages could drop substantially, while the cost of living continues to rise.”

Unite said that a collective agreement is in place which allowed a certain percentage of agency workers, but this was being severely undermined by the ongoing replacement of permanent trained dockers, who number about 24, by even more agency/casual staff.

Jane Jeffery said: “Although the action is for 48-hours, our members are being denied overtime and prevented from booking holidays. Agency labour is being used to cover their duties and working 14 hour days in order to do so.

“It seems that the management of the Swedish-owned SCA Logistics is hell-bent on antagonising and prolonging the dispute, instead of reaching a settlement through discussion and negotiation.

“Unite will strongly resist the very real threat of the workforce at this company becoming 100 per cent employed on zero hours contracts.”

The strike will only hit vessels being serviced by SCA Logistics at Tilbury.