THURROCK Council Leader John Kent has slammed as “irresponsible” a story which appeared on the front page of the Thurrock Gazette in April.

It claimed the government had promised to fund a study into building a road between Canvey Island and Thurrock – a plan unanimously rejected by Thurrock Council.

The criticism comes after a bitter war of words last week over the reports that Labour and Conservatives were involved in talks re a coalition. After publishing a number of stories, the editor, Gary Pearson went onto twitter, goading John Kent stating: “Haha. Now come on @Johngkent you know the truth.” 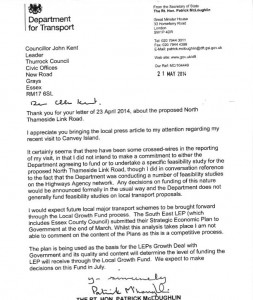 The story, headlined “Big money road plan to join us to Canvey” claimed “A new road linking Corringham and Canvey could be built – after the Government pledged £750,000 towards the project”.

Cllr Kent said: “This is not true and anyone with a jot of common sense would have known it was not true. Unfortunately it took the minister a month to reply to my letter asking the question.

“He now says he didn’t commit to ‘fund or undertake a specific feasibility study for the proposed North Thameside Link Road’, the Department for Transport does not fund feasibility studies for local transport schemes and that if the road was a serious proposal, it would be part of Essex County Council’s Strategic Economic Plan from March – which it was not.”

Cllr Kent added: “I suspect some Canvey councillors made up the comments or at least twisted the facts beyond breaking point and one of our local papers fell for it, hook, line and sinker. They were so convinced it was true they didn’t bother to check.

“The newspaper management and staff will know who they are, and I’m sure the borough’s other outlets will ensure they are not tarred with the same brush.”

YT requested a response from Newsquest but had not received a reply at the time of publication.