The Spin win the Battle of the Bands

SWEDISH band “The Spin” won the 2014 “Battle of the Bands” at the Springhouse Club in Corringham on Friday 30th May 2014. 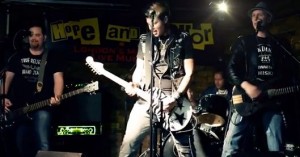 Entries were received from more than twenty bands from whom twelve were selected to take part in the radio heat on Gateway 97.8 , where listeners voted for their favourite six bands who would contest the final.

Playing to a sell out audience of over 250, the six finalists battled it out for the title. It was a hard fought contest, with the judges awarding the title to “The Spin” with “7786” as runners up and “Indies at five” in third place. There was also a cameo performance from last years winners “Not Now Jhon”.

The final was hosted jointly by the Rotary Club of Corringham Thameside and Gateway 97.8. The event raised over £1300 for their chosen charity, “La danse fantastique”, a dance troupe for “special needs” children.