Charity on lookout for young songwriter to pen birthday anthem!

THE Jack Petchey Foundation has opened up a song writing competition for young people in Essex & London to coincide with the organisation’s 15th birthday.

11-25 year old songwriters and musicians are being sought to write and record a CELEBRATION ANTHEM along the themes of INSPIRATION and ACHIEVEMENT – which are central to the Foundation’s ethos.

88 year old Jack Petchey CBE said, “Since setting up the Foundation 15 years ago, I have been overwhelmed by the enthusiasm, dedication and achievements of so many young people. The 15th Anniversary Anthem gives them the chance to write a song that really represents all of these qualities, and I can’t wait to see what they come up with.”

The winner of the competition will record their song in a leading London studio with an experienced producer and team of industry professionals. They will also perform their song at the Jack Petchey Foundation’s FESTIVAL OF YOUTH in Spring 2015.

The celebration event will commemorate 15 years of recognising and celebrating the achievements of young people for the Jack Petchey Foundation in a showcase that will feature performances from the charity’s various programmes including Step into Dance, Jack Petchey’s Glee Club Challenge, the Speak Out Challenge and Panathlon.

The anthem can be from any genre and by a group or individual.  It MUST have instrumental accompaniment and strong lyrics.

Applicants must be aged 11-25 and based in the UK.

Eight finalists will be selected for a mandatory boot camp with industry professionals to offer guidance and advice on song-writing, performance and musicianship. The groups will then re-record their songs, taking on board the feedback from the boot camp. 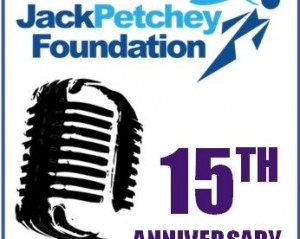 entries will face a public vote via YouTube and judging from a panel of experts. Each of these methods will account for 50% of the final scores. The closing date for entries is Friday 11th August.

For the full terms and conditions and details on how to enter, visit: www.15thanniversaryanthem.co.uk