Swimming: Sonny off to sunny California

EIGHTEEN-year-old swim star Sonny Ford will soon be swapping the grey skies of Thurrock for the golden state of California, USA.

Sonny who is currently studying A levels at Palmer’s College has been awarded a prestigous 4 year swimming scholarship at Fresno Pacific University, California. Since the age of nine, the former William Edwards student has dedicated a big part of his life to the sport of swimming which has seen him consistently win honours at County and Regional level, while also qualifying for UK National finals and gaining selection on the England talent development programme.

Sonny will now reside in California, training and competing for the Fresno Pacific Sunbirds, while studying a degree in Kinesiology.

The butterfly specicialist will be the only English representative on a team that is currently making a big impact on the west coast of America. 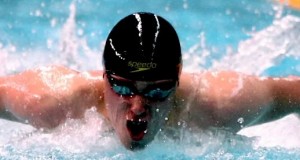 Sonny leaves for the US in August immediately after competing at the UK national swimming championships in Sheffield.