Music with distinction at Palmer’s College

MUSIC students have been busy creating and producing tracks to be launched on the College’s very own record label – Distinction Records.

This year’s Level 3 BTEC Music Technology students have had the brilliant opportunity to release their own music across all popular digital download websites, thanks to the College’s Music department setting up the College’s very own record label.

Kieran Eldridge and Hayley Neale have been the first to release their tracks. Their EP track ‘Moving on’ has been released by Distinction Records.

Both students have written, produced, recorded and released their own individual acoustic tracks to create the EP, with the expertise of Palmer’s music staff. Kieran’s track ‘run’ and Hayley’s track ‘moving on’ are both about love and the pressures of relationships. The technical skills of fellow Music student Brody Faulkner was used for mastering the tracks.

Kieran had originally decided to follow an A-level programme after gaining excellent GCSEs. After a few months of studying A-levels he knew it wasn’t what he wanted to do, so after finishing his first year – he enrolled onto the Level 3 Music Technology course.

“Moving onto the Music course at Palmer’s was the best move I made. My dream is to be a musician; I love music so studying Music was all that I wanted to do. I hope to make it as an artist but if it doesn’t work out I still have the skills and qualifications I have gained at Palmer’s.”

Principal of Palmer’s College, Mark Vinall said: “This initiative is a great example of the entrepreneurial creativity of students at Palmer’s”.

A snippet of both tracks are available via soundcloud: https://soundcloud.com/distinctionrecords and can be purchased via iTunes.
ENDS 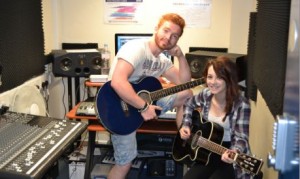