FORMER Tilbury councillor, Richard Bingley has announced that he has joined UKIP.

Richard was head of Labour’s East of England and London media operations during Tony Blair’s second and third terms as Prime Minister. He was seconded back to the Party to run its ‘Key Campaigner’ (Cabinet Minister) visits during Gordon Brown’s fateful 2010 general election. He also served for seven years as a c 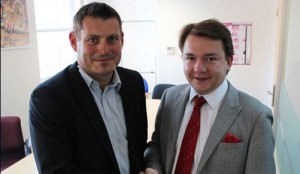 ouncillor in Thurrock until 2010, where UKIP recently made spectacular gains.

Three of those years (1997 to 2000) was a Conservative councillor in Corringham and Fobbing. The other four years was as a councillor in Tilbury St Chads between 2006 and 2010.

Now a business leader and Senior Lecturer, Richard explains why he will be supporting UKIP at the 2015 General Election and beyond: “I have joined UKIP to help promote their values of democracy and fairness and also to endorse a general sense of pride and celebration in being British.

“I will miss some friends and former colleagues in the Labour Party, but I do have to accept the rather inconvenient truth, that UKIP is now the only credible political representation for hardworking, aspirational British families. For many years Labour has dogmatically abandoned hard working British people to promote a terrifyingly irresponsible ‘something-for-nothing’ culture. This has suffocated enterprise and society’s ability to convey positive messages around the value of hard work and achievement by merit.

“Working life, or establishing a business in Britain, has become a little like having a Grand Piano consistently strapped to one’s back and then being ordered to run a Marathon. The good news is voters do now have the power to change this. UKIP present hardworking, aspirational voters with renewed hope. UKIP is a refreshing, forward-looking, and innovative social change-maker. The Party provides sensible answers, to the many questions which David Cameron and Ed Miliband insisted – until recently – that we, in our millions, were mistaken to ask in the first place.

“UKIP is the only mainstream political party that supports democracy, social fairness and economic literacy. When we deviate from these values, Britain gets into a mess. UKIP represents the first chance in several generations for authentic representatives of hardworking British citizens to roll back the continuously out-of-control levels and misdirection of Government spending.

“There is quite rightly an overwhelming sense of frustration within this country – across all backgrounds and professions – that Britain’s political leadership has profoundly lost its focus internationally, and also any sense of fairness and sound judgement at home. Whether it’s the handing over of powers to unelected EU commissars, ham-fisted interventions into complex foreign conflicts, the early release of violent prisoners at home, the inhumane lack of resources for our elderly and disabled, or yet another calamitous response to a national crisis, the other three main parties have demonstrated time and again that they lack core skills in strategic leadership and situational management.

“Our politicians should follow the lead of our many successful British multinational business leaders, and stop treating countries outside of EU and NATO territories as adversaries who we have the right to patronise and issue rather facile, one-sided lectures to. Far more ministerial understanding and support should be allocated to helping our enterprises target the dominant, huge emerging markets: for example, Brazil, Russia, China, India, the Gulf States and Africa; rather than, say, negotiating Albania’s entry into the EU.

“People have asked me if UKIP is racist or full of bigots. Evidence from the campaigns that I have seen suggests that nothing could be further from the truth. My experience is that UKIP is overwhelmingly made up of decent, hard-working, open-minded people from all ethnicities and backgrounds, who are coming together to develop a positive pathway out of the mess that the three other main parties have left this country in. I would not touch UKIP with the proverbial bargepole if the organisation in any way condoned discrimination.

“For the health and wellbeing of British voters and viability of our future economic base, we do desperately need a fundamental change in the type and quality of our national politicians. Change is not an option but a necessity. UKIP’s broad range of members and supporters – including teachers, nurses, shopkeepers, business leaders and entrepreneurs – does at last offer hope that Britain can be run responsibly and honestly in the future.”

Tim Aker MEP who welcomed Richard to UKIP said: “This is obviously positive news for us and yet more sign that UKIP is appealing to those voters left behind by the Labour Party.”​​​

20 Responses to "From Conservative to Labour to UKIP: Former Thurrock councillor joins UKIP"