Hereford United, made famous after their FA Cup exploits in the seventies but their recent chequered history almost mirrors Grays Athletic’s recent past.

Hereford staved off relegation from the Conference Premier but then have had to tumble down the leagues due to financial problems.

The Grays connection began when Loughton businessman Tommy Agombar, whose son Harry played for Grays Athletic, became involved with a plan to save Hereford.

Now it appears that Grays chief, Joel Nathan has gone down to Hereford to help Tommy.

Speaking to The Hereford Times Joel Nathan said: “Tommy Agombar is a personal friend and he asked me to come to Hereford United and have a look at the club,”.

“I have been to Hereford United for a couple of days and my remit is to have a look at the club and to report back to Tommy”.

Initially, there appears to have been some confusion as to whether Mr Nathan had left Grays Athletic but it appears at the moment that he has gone down to Hereford on a mercy mission and nothing more.

YT understands that Grays Athletic will play Hereford United in 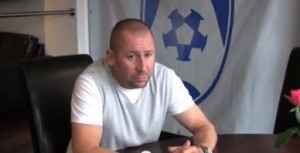 a friendly at Edgar Street on July 19.