IT WAS a small but significant moment of respect that one of our roving reporters captured at the weekend.

A young family were passing by the Stanford memorial, a memorial that is cherished by the residents

Local boy Ben (7 ) was with his family near to the memorial on The Green.

He thought he would salute and pay his respects.

He later went onto his mother Joanne’s facebook page to express how he felt.

Ben said: “Hi I am Ben, the boy in the picture is me. I like to show how thankful I am because without brave people in the armed forces.

“I wouldn’t have the nice life I have, I am seven”

Ben’s Mum told YT that Ben’s Dad was in the army and that every Remembrance Sunday, Ben puts on his uniform and goes down to the war memorial, Ben will always salute and shake hands with veterans and thank you. 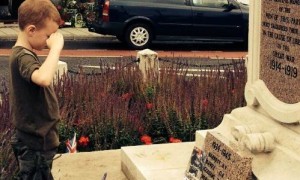