Alfie the wonder dog sniffs out 6000 fags in Grays 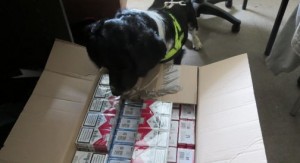 detection dog has discovered 6000 cigarettes and chewing tobacco in Grays as part of a national operation.

A crackdown on the supply of illicit tobacco across nine regions in England, Operation Henry is coordinated by HM Revenue and Customs (HMRC) and the Trading Standards Institute (TSI), with the support of local authorities and the police.

Each region receives eight days of dog detection that is provided by Wagtail UK and funded by the Department of Health. The operation is managed by the TSI. This partnership allows trading standards officers to identify possible illicit tobacco activity by combining intelligence from HMRC and trading standards.

Alfie the dog helped detect the concealed stashes of tobacco at two premises on Friday.

Leon Livermore, chief executive of TSI, said: “This partnership is one more example of how trading standards works with the private and public sectors to protect consumers and support legal business practices. Through this partnership, trading standards has a unique opportunity to share information and develop intelligence with the aim of taking illicit tobacco off the streets.”

The seizure included non-duty paid cigarettes and a tobacco product used for chewing which cannot be sold legally in the UK. The visits were conducted as a result of information provided by the public.

Thurrock Council’s portfolio holder for public protection, Cllr Phil Smith, said: ‘‘Those dealing in illegal tobacco may be encouraging people – including children – to smoke by providing a cheap source. The detection dogs can find tobacco and cigarettes even if hidden in the most unlikely places. Offenders need to know that they will face consequences if they choose to sell these illegal products.”

Richard Las, deputy director of criminal investigation for the HMRC, said: “HMRC works closely with other enforcement agencies to crack down on illicit tobacco in the UK. Seizing illicit products is only one of the tools used; the focus is on using a range of interventions – from penalties to prosecutions – to encourage compliance and maximise deterrence.”