Leigh batted first and posted a formidable 285 run total. Belhus’ Joe Joyce was their top wicket taker with four scalps. The Belhus run chase was a valiant one but fell just short of success in what was a tremendously entertaining match. Joe Joyce top scored with 70 and Danny Joyce made 54.

Belhus’ seam attack made good use of favourable overhead conditions at the South Ockendon recreation ground. Conditions which in the end were to prevent them from sealing a victory after dismissing the visiting Hutton 4’s for what was always going to be a comfortable total to chase down.

Rhiannan Jefferies top scored for Belhus Ladies with an impressive 13 not out against their illustrious guests in this T20 encounter at North Stifford. Though as expected, the intermediate county development eleven powered their way to an unassailable total, largely due to a strong opening start by Sophie Tudor and Grace Oswald, both retired having scored 25 runs apiece. This led the way for Kaz Ravalia to plunder 28 not out from just eight scoring shots, hitting five fours and one huge six over mid-wicket. The most economical Belhus bowlers were Jefferies, Sarah Fergey and Charlotte Hughes, who conceded just seven, three and twelve runs respectively from their two overs.

Opening Belhus batsman Sarah Fergey showed strong resistance against the strong visiting attack and only succumbed to a sharp run out at the bowler’s end when attempting a quick single. This was the sixth wicket to fall with the home score at 45.   Pick of the Essex bowlers were Rhiannon Hales with two wickets for the same number of runs and overs which included one maiden. Jasmine Smith bowled two maidens, White bagged 2-10 while Tudor collected 1-7, also from two overs. 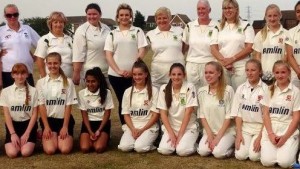