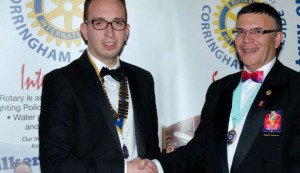 Here is the latest news from the Rotary Club of Corringham Thameside.

The Rotary Club of Corringham Thameside is pleased to announce that they have been successful in obtaining a grant from the National Lottery of £5,000. The money will be spent on replacing a number of items of equipment to help the club to raise its profile within the community and to attract new members.

So far, we have purchased a new gazebo, which has been branded with the club’s logo and have replaced a number of banners which have been in use for nearly 30 years.

More purchases will be made in the near future, ensuring that the money is spent wisely.

On Friday 4th July 2014, the Rotary Club of Corringham Thameside celebrated their 33rd President’s night at The Ivory Rooms in Billericay. The event was attended by nearly fifty Rotarians and their guests, including District Governor Stan Keller.

During the evening, club president, Danny Lawrence presented a cheque to Mrs. Moira Brock for La Danse Fantastique, a dance troupe of “special needs” youngsters. The money was raised from the club’s recent “Battle of the Bands” concert and a sponsored trek up Ben Nevis by two of its members.

As is the tradition, a short humorous presentation was made about President Danny Lawrence. It took the form of a “tongue in cheek” version of This is your life, which highlighted the many awards that Danny had been given during his career, including the B.E.M. in this year’s New Year’s Honours List. There was an added chapter to the story when Danny was “knighted” by the “Queen” for his services to the waste paper and scrap metal industries. All part of the fun of the evening.

Before the revellers took their place on the dance floor the President’s chain of office was passed by the District Governor to the club’s new president, Charlie Key, who becomes the youngest member to have held the office at just 25 years of age.