THE Royal Opera House FUSED festival got off to a fantastic start last Thursday as the massed ranks of two choirs and two orchestras performed Verdi’s rousing and powerful Requiem to a packed auditorium at The Backstage Centre on the High House Production Park.

The Royal Opera House Thurrock Community Chorus was joined by the Brighton Festival Chorus and the combined forces of two outstanding French orchestras, L’Orchestre Symphonique de Bretagne and Orchestre de Picardie, under the baton of Dutch conductor Arie van Beek to perform Verdi’s Requiem. Two sold out performances saw 200 singers and 85 musicians fill the venue with magnificent music. After the performances, the exterior of The Backstage Centre became the focus for a series of projections created by the University of the Creative Arts, bringing the building to life with colour and animation. Sculptures based on recordings of the conductor’s and musicians’ movements during the Requiem were cleverly positioned in the walled gardens.

On Saturday RM19, the Royal Opera House youth vocal group in Thurrock, performed the world premiere of A Little Thing Called Life. The performance marked the culmination of several months’ work during which RM19 has been exploring concepts of remembrance, conflict and loss – themes drawn from within the Requiem and the centenary of World War I – to create an original piece incorporating music, drama and design.

The performances of Verdi’s Requiem are part of the Royal Opera House’s involvement in ACT – A Common Territory, a European partnership between 13 partner organizations on both sides of the English Channel. The partnership supports live performance and culture through the development of projects fostering and developing creative skills in local people and promoting wider access to art and cultural events. 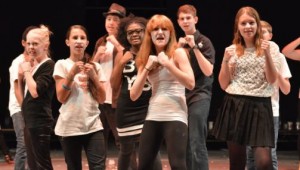