Students worked in pairs and competed against 53 teams from across the UK at the ICMA Centre’s world class trading rooms.

Nine first year students were put forward to enter the competition from Palmer’s which took place in London. Students took on the roles of traders and analysts during the virtual trading day. The aim was to make the greatest profit by selling and buying company stocks including Apple, Bank of America, Delta Airline, GSK, Google etc across the day and putting into practice what they had learnt in their lessons.

However, only one team could take first place and it was none other than Palmer’s students Fiona Ragan and Sam Flatt who won the competition by making over £400,000 in profit.

Principal of Palmer’s College Mark Vinall, said: “All of our students did very well and for one of our pairs to win first place in the national competition is truly outstanding.”

Winners Fiona and Sam were both presented with certificates, a trophy and an iPad mini each.

Ex-Grays Convent student, Fiona Ragan, 17 said: “It was the best experience ever, competing against other schools/colleges really made you want to win.

Ex-Gable Hall student, Sam Flatt, 16 said: “I enjoyed meeting new people. Working as a trader/analyst as part of the virtual trading day felt very real! I was proud to represent the College and really proud to be part of the winning team.”

Fiona hopes to go onto university after Palmer’s College and Sam would like to gain a trainee apprenticeship a local Accountancy Firm. 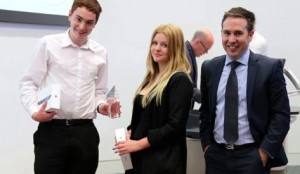