Another night of thunder and lightning

IT WAS like the scene from any number of movies. At times it was a bit War of the Worlds and at other times like Independence Day as the sky was twisted and torn in a very dramatic style.

Many people sat outside in their gardens after a day in which the temperature topped 31 degrees and saw a sky turn yellow and then the dark ones came over and we were “treated” to thunder then lightning and then rain.

We also learned what a supercell was!

Lightning strikes in East Tilbury delayed trains on the C2C line but in the end no martians landed. 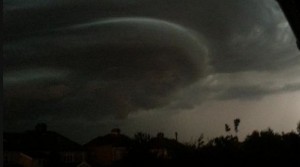