Arena Essex’s annual Caravan race took place on Sunday with its usual brand of all out chaos erupting as soon as the green flag was waved.

Ian Phillips was the first to lose his caravan as Sophie Unwin and John Golden combined to spin him on the first bend. A huge smash then ensued with Lee West ramping up the back of a stationary caravan at the same time as Dave Palmer, Palmer came to rest inside a caravan whilst West went for a spectacular barrel roll through the debris. Before the red flags came out to check on the drivers obscured by the debris, Jason Jackson lost his caravan body on the pit bend before planting himself into the turn one wreckage, Alfie Lee went through a discarded caravan body, James Steel spun Dave Reynolds and Dave Bull drove through Jacksons caravan.

Quite a few were missing from the restart but Paul Korpiela, who had started with two caravans for an extra challenge, somehow still had both attached, although they weren’t to last much longer. Both caravans were targeted by Dave Bull, Jason Jackson and Alfie Lee along the back straight, Bull riding for about half a lap on the back of Korpiela until he eventually fell off on the pit turn, whereupon he continued to drive at caravan debris until his car cried enough. Korpiela took the flag with his view partially obscured by some remains, the event then turned into a destruction derby. John Golden ramped up the chassis of Korpiela and landed in his rear window, the car teetering on two wheels long enough to allow Jackson to move in and tip him completely onto his roof. Jackson eventually outlasted Korpiela for the win.

With many racers saving themselves for the caravan race, the earlier Banger races were pretty quiet although it did look briefly like all out warfare might have broken out when Karl Douglas and Jason Jackson clashed, leading to members of both their respective teams going in hard on the pit bend, Leon Sudbury being the main victim, followed into the fence by Jackson. Sonny Sherwood won heat and final with James Steel winning the other heat.

The Junior Bangers provided three entertaining races with an early rollover for Brandon Sudbury resulting in a complete restart of the first heat. Jack Coveney won both the heats and was looking good for the final too until a fluffed attempt to spin out Max Friess took him into the fence with just over a lap to go. Charlie Randell took over to take the win, despite having been launched onto two wheels earlier in the event. Coveney did eventually restart but his suspension collapsed in sight of the flag.

Matt Rowling drove superbly in the Stock Rod final, overtaking Ian Heffernan in the closing stages for the win. Heat wins went the way of Paul Haralambou and Malcolm Burton.

Controversy once again abounded in the Lightning Rods with Dave Imber disqualified in the first heat for spinning Keireen Thomas into the home straight fence. Nigel Carroll looked set for the win until a misfire lost him a lot of ground in the final two laps, Anthony Lawrence gratefully inheriting the place. Chris Reeve won the final but there was much interest surrounding the winner of heat two – Veteran racer, 64 year old Roy Rawlins was already punching the air half a lap before he took the chequered flag, his joy matched by that of his watching family. His car had sat on top of a storage unit for about six years since his last outing. Roy’s appearance on BBC TV’s “Fast and Fearless” series has certainly rekindled his desire to race again. Indeed as well as future Lightning Rod outings planned, he is also entered for the next all action Banger spectacular – The all Ford Granada Banger event on the 27th July.

And that is where the Arena Essex season takes us next. Over 90 cars have booked in for what is likely to be the highlight of the Banger racing season. The incredible action seen at last years event made many racers and fans herald the event as the best meeting of all time. Once again the meeting will be raising funds for the Meningitus Research Foundation in memory of Maya Ford, with support race action from the Stock Rods and Mini Stox. Start time is 1pm.. 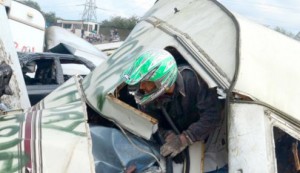