Birds of Prey to swoop on Orsett Show 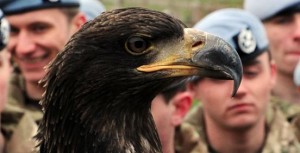 THE timetable of the events in the main Show Ring at this year’s Orsett Show is coming together and will feature two displays from the Imperial Bird of Prey Academy which is always extremely popular. The Academy was founded in 2011 by Nigel King and along with Lisa Falco and the team based at Barleylands, they have built up a fantastic reputation for flying birds in demonstration. They are regulars on the Falconry circuits around the UK, flying at many high profile events including the Annual International Falconry and Raptor Fair and The Falconry Weekend.

Nigel has over 35 years of experience of working with birds of prey and has worked all over the world spending a lot of time in South Africa, as well as working as a Bird Trainer and Show Presenter at ZSL London Zoo. Lisa also has lots of knowledge and experience of birds of prey and has trained birds for film and TV. The team pride themselves on being able to deliver a first class educational flying demonstration with a touch of humour.

Imperial have a host of birds including the tiny “CHAOS”, a burrowing owl from the United States, right up to the mighty “ZEPHYR”, a female Bald Eagle, who is also the mascot for the Army Air Corps (image attached). Other birds include “HORUS”, a high flying Lannerette and “GRACE “, the amazing hovering Kestrel. There may even be an appearance from “GONZO”, the hooded vulture, so be sure to catch the flying demos which will take part in the main arena on Orsett Show Day. As well as flying the birds, the Imperial team will have a host of static birds and will be happy to answer any questions visitors to the Show may have!

One Response to "Birds of Prey to swoop on Orsett Show"