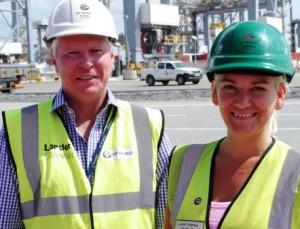 DP WORLD London Gateway has announced a further 50 jobs at its South Essex deep-sea container hub port – and has women firmly in its sights.

The newly-opened international container terminal is looking for ‘Terminal Operatives’ to operate a variety of high-tech cranes and vehicles to move goods from ship to shore as well as support all other aspects of the terminal’s operations.

Applications are invited equally from men but in a bid to encourage diversity and dispel myths that ports are not for women, DP World London Gateway wants women to take a fresh look at what the modern port has to offer.

DP World London Gateway CEO, Simon Moore, said: “It’s really important to us to have as diverse a workforce as possible bringing many benefits to all in the workplace.

“We have a number of women in our team, but not as many as we would like – and the stereotypical view of what a port is like, couldn’t be further from the truth.

“We have one of the most advanced, highly-automated ports in the world and there’s a real buzz and excitement here. Our Terminal Operatives, who are highly trained, undertake a key role in ensuring that goods imported and exported across the globe reach the homes of people in the UK and beyond.

Simon, continued, “We will train people to have the skills needed for the job. What we are looking for is a real sense of commitment to the team. We feel close as one team and it’s like a family. We want to combine this ‘1team’ ethos with a focus on working responsibly in the in the port. With health and safety being our number one priority, we will only recruit those who think health and safety first.”

The superport currently has 400 team members and offers a range of jobs through its website at www.londongateway.com/careers. The port opened in November 2013 and now has two berths open, with four still to come. The port and logistics park is expected to employ 12,000 people when fully developed, with an estimated 24,000 further indirect jobs created.

Denise Rossiter, Chief Executive of Essex Chambers of Commerce, commended DP World for its efforts to encourage more women to join the team. “Not only is this another fantastic boost for the South Essex economy, but it’s great to hear that diversity is being encouraged, with a range of opportunities on offer for men and women alike,” she said.
Former beautician Nicki Allabush, from Stanford-Le-Hope, has been working as a Terminal Operative for 18 months and loves her role.

“I absolutely love the challenge that this job offers,” said Nicki “When I first heard about the role I was so excited that DP World London Gateway were employing women to drive the cranes and couldn’t resist applying. I thought if men can do it, women can too.

“I also like the shift work and the pay is good, plus I feel valued as part of a friendly team. There are great facilities, including a fantastic gym, canteen and lots of fun social activities.”

Nicki and her colleagues have been chosen to appear in a fly-on-the-wall video series which can be viewed on London Gateway’s Facebook and YouTube channels, to give job seekers a better insight into the role they undertake.