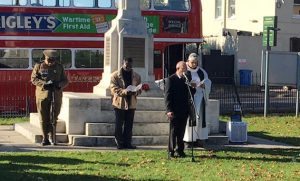 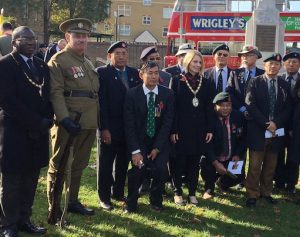 THERE was an impressive turnout for the start of Thurrock’s Remembrance season when St Stephen’s Church, played host to a ceremony organised by the nearby Purfleet Military Museum and Heritage Centre on Sunday.

Thurrock MP Jackie Doyle-Price and Mayor Cllr Cathy Kent led the wreath-laying during the service led by the Rev Alan Hudson. A large numbers of members of the Thurrock Nepalese community, many of them former Ghurkhas, were present.

A number of other councillors and dignitaries and representatives of other local organisations were also present and laid wreaths. Particularly poignant was a wreath which was hand -made and laid at the memorial by members of Purfleet Cubs.

Re-enactment soldiers mounted a guard of honour and the Last Post and Reveille was played by a lone bugler. The names of all those lost in action from Purfleet were read out.

Heritage Centre founder and chairman Alan Gosling said: “It was another memorable service, particularly so as it was in the 100th anniversary year of the Somme campaign. We were blessed with some great weather and I would like to thank everyone who attended and supported the event, particularly Ensignbus who once again provided us with a vintage bus for those who couldn’t walk in the parade from the centre to the war memorial and also bikers and members of the re-enactment group who did their usual sterling service.”