FRIENDS have paid tribute to a Dagenham teen who was stabbed to death last week.

Duran Williams Kajiama, 17, a student at Palmer’s College in Grays, died in an east London hospital on Sunday, November 13, after suffering ’stab injuries’.

The Metropolitan Police Service said Duran – known by the nickname Dee – was believed to have been killed over an argument outside a fast food restaurant.

Duran’s death has spawned the Twitter hashtag #DsWorld, which friends are using to post tributes, including videos of the teen performing dance routines.

Principal of Palmer’s College, Mark Viball said: “Staff and students at the college were deeply saddened to hear of Duran’s death. It is a tragic loss of life and our sympathy and condolences go our to his family and all those who knew and loved him.”

Police have not yet named Duran as the victim but loved ones have started a fundraising page to pay for his funeral.

So far more than £3,500 has been donated to the page, called ’Dee’s World’, which says: “Raising money to give our brother, son, cousin, friend the send-off he deserves.”

One donor, Chloe Machin, wrote: “Rest in peace, my lovely. You had a heart of gold and you will be missed by many. Forever in our hearts Dee.”

Ellie Mayhew said: “Thank you for always making me smile Dee. Let’s give you the send-off you deserve. Rest well, D. Love you.”

Anybody with information about the stabbing was urged to contact the incident room on 0208 3453775 or call Crimestoppers anonymously on 0800 555111.

To donate to the funeral collection, visit: 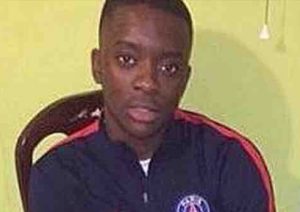