AFTER defeat away to top of the table rivals Millwall last time out, Stanford were keen to put on a performance that showed they are still the team to beat in their division. Welcoming back their captain and vice-captain, Calum Reid and Ricky Percival respectively, they were keen to put points on the board quickly. 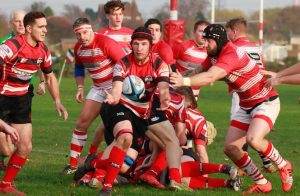 Stanford had Dagenham on the back foot straight away with a series of well worked set pieces, they found themselves on their opponents five metre line, a quick tap from a penalty by scrum-half Neil Cockrell and Stanford had their first try of the match. It was only a matter of minutes after the restart when Jamie Lake broke from full back to cross the try line. Stanford were then piling on the pressure and after a numerous pieces of great passing rugby, Liam Morley found himself with a hat-trick of tries by the 30th minute. Stanford going into half time 29-0 to the good.

The second half started exactly like the first, some good offloading rugby lead to Ryan Edgeway getting the ball just outside the oppositions twenty-two and he raced clear to score Stanford’s sixth try of the game. The next fifteen minutes was quiet with Dagenham putting in some great defensive work, Stanford made a few changed with Daniel May, Kevin Foley and Kyran Carney making way for Luke Tyson, Sam Herbert and Dominic McDonald respectively. Shortly after a flurry of tries came to Stanford with Matt Rumble bagging himself a brace either side of Jack Kenworthy grabbing a try himself.

Stanford weren’t finished there; despite going down to fourteen for the remainder of the game, looking to improve their points difference as much as possible, Stanford kept playing an expansive free-flowing game and against a weary Dagenham defence. Ash Smith found himself on the end of an offload five metres out and crashed over the line. Then a superb individual effort from Jared Gounden and the second of the game from Jack Kenworthy completed the scoring for Stanford. Running out easy victors with a 72-0 win, in a game where they could have easily scored more.

Matt Rumble and Troy Elkes were given the awards of men of the match.

Next up for Stanford is an away trip to Billericay in two weeks time.

The first half saw Stanford controlling,holding possession and making good ground allowing the wingers to finish the job, Half time scores were 20-0

The second half started the same as the first with good strong rucking and passing of the ball adding to the final scores.

The defence was solid and not one try conceded, The final score 50-0

Player of the day awarded to Will and Wally of the Week goes to Charlie G.