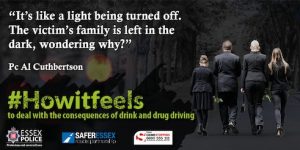 ESSEX Police have launched their Christmas Anti-Drink and Drug Driving Campaign in partnership with the Safer Essex Roads Partnership (SERP).

Essex Police takes a zero tolerance approach to drink and drug driving 365 days a year and will be supporting the National Police Chief Council’s campaign between December 1, 2016 and January 1, 2017.

This year’s campaign targets perpetrators and the family and friends who know about their offending by highlighting ‘How it Feels’ to deal with the consequences of drink and drug driving. It aims to push home messages about the far-reaching consequences through the eyes of road policing officers who witness them first-hand.

To help spread those messages, two long-serving road policing officers have voiced a radio advert which will be aired on Heart FM throughout the festive period.

Pcs Tracey Bishop and Al Cuthbertson have more than 30 years’ experience of road policing between them and have witnessed the devastating consequences of drink and drug driving. They agreed to record the hard-hitting 30 second advert in a bid to encourage anyone with information about drink and drug drivers to do the right thing and report them.

Their real life experiences together with those of some of their colleagues will feature in targeted social media posts throughout the campaign.

Pc Tracey Bishop, who is also a Family Liaison Officer, said: “Having to tell someone their loved one has been killed because a driver made the selfish decision to get behind the when under the influence is the worst part of my job. There are no words to describe the devastation caused by drink and drug driving.”

During the campaign road policing officers will be patrolling towns with busy night time economies as well as rural areas where some drivers believe they have less chance of getting caught. As well as breath tests they will be using drug testing kits to detect drivers under the influence of illegal drugs including cannabis and cocaine.

Throughout, we’ll be keeping residents up to date on our social media channels with how many drivers we’ve breathalysed and drug tested and how many of those have been arrested.

Between January and the end of October this year, a total of 1735 people have been arrested on suspicion of drink and drug driving offences.

Following collisions attended and recorded by Essex Police during the same period, 7.6% of those breathalysed were over the legal drink drive limit.

Adam Pipe, Casualty Reduction Manager at Essex Police, said: “Christmas should be a time for celebration and spending time with loved ones. Our officers are passionate about road policing and will be working throughout the festive period to give people the chance to do that in safety.

“However sadly there are people who will make the decision to get behind the wheel knowing they have consumed alcohol and/or drugs and are not fit to drive. The harsh reality is that their selfish actions could result in our officers and innocent road users having to deal with the horrific consequences of drink or drug driving.

“The images our officers see when they’re called to the scene of a collision stay with them forever. They don’t want to be knocking on any doors this Christmas to break the news that someone has been killed.

“We work tirelessly 24/7 to keep the roads safe but we need your help. Please please please don’t get behind the wheel if you have been drinking or taking drugs. We are better equipped than ever to detect offenders and it is only a matter of time before you’re caught and put before the courts.

“We’re asking everyone to do their bit to help keep the roads safe this Christmas . If you know someone who drink or drug drives, please do the right thing and report them by calling us on 101. If you would rather not speak to police you can call the independent crime-fighting charity Crimestoppers anonymously on 0800 555 111. You won’t have to give your name and no one will know you called but the information you give could help stop a family being torn apart this Christmas .”

Nicola Foster, Chair of SERP, said: “The devastation that drink and drug driving causes is clear yet we continue to see drink and drug driving behaviour on the roads of Essex. We would urge drivers not to get behind the wheel if they have been drinking or taking drugs. Think! Never drink or drug drive. It’s not worth the risk.”

Roger Hirst, Police and Crime Commissioner for Essex, said: “One of the key objectives in my police and crime plan is to improve safety on our roads. But it’s not just the responsibility of the authorities. It is up to all of us as motorists to make the right decision when choosing to get behind the wheel. If you have been drinking or taking drugs you should not be getting behind the wheel of your car or getting on your motorcycle and driving. I want to reduce the numbers of people killed and seriously injured on the roads of Essex and this campaign is a great way of reminding individuals of their responsibilities.”

Liam Duffy, Eastern Regional Manager for Crimestoppers, said: “Drink and drug driving is a crime; a crime which causes deaths on our roads every year. Drink and drug drivers not only put themselves at high risk of death or injury, but they put other road users and pedestrians at risk too.

“As we approach Christmas , the risk is even greater and many people will know of somebody who engages in this type of activity, perhaps regularly. By contacting Crimestoppers, they can report information in complete anonymity. We are encouraging people to take action against drink and drug driving now by calling 0800 555 111, or by visiting the Crimestoppers website to report drink or drug drivers. By picking up the phone or using our anonymous online form you could be helping to make our roads and communities safer for everyone.”

Do you know someone who drink or drug drives? Do the right thing and report them by:

1. Dialling 999 if you know someone is drunk or has taken drugs and you see them getting behind the wheel of a car

2. Calling Essex Police on 101 to give police information about someone who regularly chooses to drink and drive