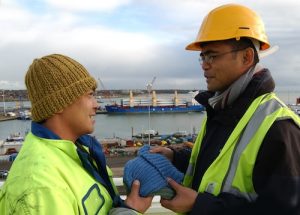 Frans Sahetapy, who works for maritime charity Sailors’ Society, was awarded the Merchant Navy Welfare Board’s Award for Services to Seafarers’ Welfare at an event in Bristol on Tuesday (29 November).

The award is in recognition of Frans’ dedicated work supporting seafarers visiting the docks.

Frans has worked for Sailors’ Society for more than a decade, initially as a port chaplain in the charity’s home port of Southampton and for the last two years at Tilbury and London Gateway.

Frans provides emotional and practical support to those in need thousands of miles from home and has seen 11,844 seafarers on his 658 ship visits this year. He has also transported more than a thousand seafarers to local amenities.

Stuart Rivers, Sailors’ Society’s Chief Executive Officer, said: “Frans is a true friend to seafarers visiting the ports he serves. Often, those he has helped keep in touch to let him know of their progress, which brings home how important the support he gives is to the men and women who dedicate their lives to a career at sea.”

Frans said of winning: “I love supporting seafarers and their families as a port chaplain and was delighted and surprised to win the Award for Services to Seafarers’ Welfare.”