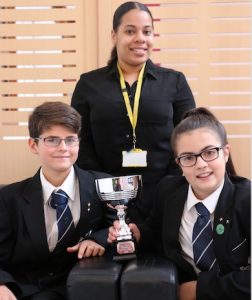 TWO students from the Gateway Academy recently took first and third place at the most recent ‘Thurrock Young Chef of the Year’ competition, held at South Essex College. Sasha, who came in first, will continue on to compete against other borough finalists, some of them Sixth Formers!

In the meantime, a professional chef will be coming in to coach Sasha and help her prepare. Both students also decided that it would be a great idea if they cooked for the Senior Leadership Team, something that Miss McLaughlin, Head of School, thinks is a fantastic idea!

Callum cooked up Veggie tartlets, Veggie lasagne and Mixed berry crumble; the inspiration came from his brother, who is vegetarian and thought it would be “a good idea.” Sasha made Homemade bread tomato bruschetta, Chicken and chorizo paella and Mixed berry fool with ginger snap biscuits. She chose her menu because “My Mum is Italian so I thought it would fit with the Mediterranean theme. At the beginning, my starter was a little late but the other courses were on time.”

The chef at the competition commented that, “Both students impressed me with their high ability, skill and professionalism at such a young age. I hope that their passion for catering continues.”