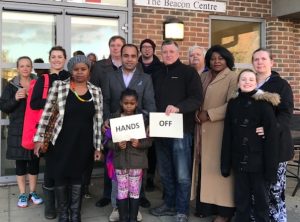 Campaigners were joined by Qaisar Abbas, Labour’s former candidate for South Chafford. Mr Abbas said “When I stood for council earlier this year, I wanted to do my best to fight damaging cuts and stand up for the community on Chafford Hundred. It was so disappointing to see all four councillors for Chafford Hundred vote for this cut. We’re not in power on the council, but we’re doing everything we can to stick up for Chafford Hundred – someone has to!”

The final decision on Children’s Centres will be made by the Conservative Cabinet in January.

Go to our Politics page to see the whole debate on children’s centres .