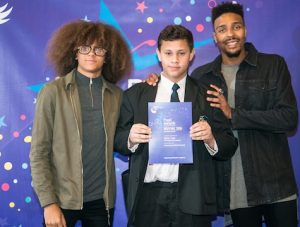 PUPILS from four Essex academies have been recognised for their achievements at Academy Transformation Trust’s Pupil Awards 2016.

Pupils from Kingsmoor Academy, Mark Hall Academy, Ravens Academy and The Hathaway Academy, which are part of Academy Transformation Trust (ATT), received their awards at a ceremony on Thursday 8th December 2016.

Academy Transformation Trust is a not for profit trust working with primary and secondary academies and further education providers in the Midlands, East of England and South East.

Hosted by street dancers Jordan Banjo and Perri Kiely from Britain’s Got Talent winners, Diversity, the ceremony brought together pupils, staff and parents from The Trust’s 22 academies to recognise and celebrate pupils’ achievements across 10 categories.

A total of 17 pupils from Ravens Academy received awards, including Cordelia Kirk who won the STEM (science, technology, engineering and mathematics) award, and Emma Elsey who received the Overcoming Adversity award, while the Keeping Dancing Alive team won the Outstanding Team award.

Karen Hammond, Principal at Ravens Academy, said: “Cordelia is capable of thinking outside the box and can explain her thinking in the most amazing ways. She shows a great attitude to learning. Cordelia loves Maths lessons and engaging her brain to solve real life problems.”

Fatima Rodrigues, Principal at The Hathaway Academy, said: “Dylan lost his mother to cancer in September 2015. He and his sister transferred to Grays from London to live with their maternal grandparents. Dylan admits to wanting to hide away but instead with encouragement and support, he attends school, dressed smart, and goes about his day in a polite and mature manner.”

Harvey Mead from Mark Hall Academy was presented with the Charity Fundraising award, while Megan Spencer from Kingsmoor Academy won the Creativity award.

Corinne Franceschi, Principal at Mark Hall Academy, said: “Harvey has been an exceptional fundraiser this year and a real driving force. Harvey voluntarily collated numerous raffle prizes from various businesses around Harlow and volunteered his time to market our charity 10k walk for children with cancer. Harvey also designed the posters, collection sheets and liaised with the charity. Harvey has definitely shown that he supports the journey we are on to make both Mark Hall and our community a better place.”

Jordan and Perri from Diversity, said: “The obstacles that these pupils have overcome is so inspiring and it is an honour to reward and recognise them for their achievements across a variety of categories. Congratulations to all of the pupils for their hard work – needless to say we are very privileged to be a part of such a wonderful event!”

Ian Cleland, CEO and founder of Academy Transformation Trust, added: “Our pupils are really great and they keep surprising us with their accomplishments – we are extremely proud of them. They all show passion and enthusiasm in everything they do and our awards give us the chance to reward them for all their hard work. Congratulations to every single one of them.”