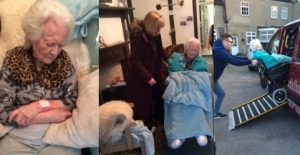 A DAUGHTER of a woman with dementia who died just weeks after being told to leave her care home in Linford near East Tilbury is bringing a legal case against the home as she seeks to clarify the law and protect elderly residents of care sector in future.

Patricia Bunn was told to leave the Merrie Loots Farm Residential Home on 23rd February last year despite, according to Patricia, her care needs being met and her family wishing her to stay at the home.

The home’s management had issued her with a 28 day Notice to Quit the home late in December 2015, essentially requiring her to leave. She had lived there for six years previously and was in the latter stages of her dementia.

Her family had been advised by her psychiatrist that “a move would be very dangerous given her health at the time”.

The family feel that their Mum’s needs were not prioritised and her “End of Life Care Plan” was ignored.

Her daughter Deborah Bunn has now instructed specialist lawyers at Irwin Mitchell to issue a case against the care home, including under the Human Rights Act. She hopes that this claim will result in private care homes no longer being able to remove people like her mother unreasonably, as few families are aware that the Human Rights Act can prevent privately run care homes unreasonably seeking to remove vulnerable residents.

Deborah, from London, said: “We simply could not believe that this could happen. Regardless of mum’s dementia she was a long term resident and one would expect there to be really strong grounds for any move at the final stage of her life. But we were powerless to stop it.

“The move to another care home which she was not familiar with was very distressing for my mother in those final few weeks of her life.

“You would imagine that all care home residents should have the right to continuity of care and their own wishes respected but this is not the case.

“It was both a shock and a relief to learn that other families had suffered as we had. We had felt so alone but we discovered that others had been campaigning for the basic Human Rights of the elderly in care and their relatives for many years. Obviously nothing can turn back the clock, but we just want to add our weight to that fight and help protect others in future.”

Alex Rook, a specialist solicitor at Irwin Mitchell representing the family, said: “Debbie is concerned both at the treatment of her mother but also after she has heard of others affected by the same issues.

“She wants to clarify the law in order to protect vulnerable care home residents in future, so we are delighted that the Department for Health has recently confirmed to Irwin Mitchell directly that individuals living in a private care home but funded by the NHS can benefit from the protections that the Human Rights Act can bring. In relation to Debbie’s mother, this could have meant her removal from the care home was prevented.

“We know that this is not an issue for most care home providers but some are using this situation to remove what they deem to be problem residents whose family are asking questions about their care, or who have become difficult to look after as they get older and more vulnerable.”

A statement issued by Carter-Ruck, the legal firm acting on behalf of Merrie Loots, run by Chigwell Homes Limited, stated: “All of Deborah Bunn’s complaints have already been reviewed by the Health Service Ombudsman and were not upheld.

Debbie is now calling for people to get behind her campaign and is seeking support to bring a claim against the home – for more information visit https://www.crowdjustice.org/case/justice- for-bunn/