Campaign to cut down medicine waste in Thurrock 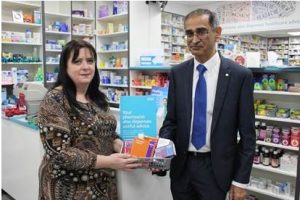 A CAMPAIGN to help tackle medicine waste is encouraging people to only use antibiotics when needed.

The Waste Not, Want Not – Medicines Waste campaign is a south west Essex initiative designed to raise awareness of the costly issue of unused prescription medicine and highlight the overuse of antibiotics.

Healthcare commissioners NHS Basildon and Brentwood Clinical Commissioning Group (CCG) and NHS Thurrock CCG have joined forces to reduce the costs of wasted
medicines which is estimated to be £2.5 million a year locally…money that could be better spent on improving services such as 100 extra community nurses.

Now with the cold and flu season well underway, the Waste Not, Want Not – Medicines

Waste campaign is sending out the message that most people will NOT need to be treated with antibiotics for their winter ailments.

The CCGs have produced a new range of leaflets on antibiotics which are available from doctors’ surgeries and the CCGs’ websites:

Denise Rabbette, Head of a joint dedicated Medicines Optimisation team covering both CCGs, said: “Antibiotics are rarely needed for coughs or sore throats because they are usually caused by a virus. Pharmacists can advise on simple self-care treatments and over-the-counter medications to relieve symptoms. Patients should not expect their GP to prescribe antibiotics because they are usually not necessary.

“As well as the money being wasted on unnecessary prescriptions for antibiotics, there is also the growing problem of antibiotic resistance. Overuse and misuse of antibiotics is leading to bacteria resistant to antibiotics which could mean many routine procedures, such
as operations and cancer treatment, become increasingly dangerous in the future.”