Mr Perrin’s Blog: What did Tony Blair ever do for us? 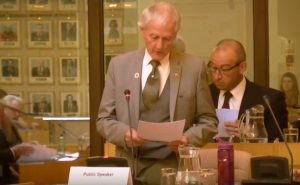 Mr Perrin’s blog: A Word in Your Ear.

In response to your blog dated 29th December 2016. True to form you put the blame, for what you perceive to be the ”disintegration” of the Labour Party, entirely on the shoulders of Mr Jeremy Corbyn and those who support him. In your book Mr Tony Blair can do no wrong, whilst Mr Corbyn can do no right. Mr Corbyn was re-elected Leader with a massive majority of 119,980, despite the despicable efforts of those opposed to him who tried every trick in the book, including a legal challenge, to prevent him from standing. Unlike you I believe it is only fair and just that when challenged a person has an automatic right to contest it, a right that the law also supports.
You claim to be a loyal member of the Labour Party and accuse Mr Corbyn of being “the most disloyal member in the history of the Party”. You seek to justify your accusation by noting that Mr Corbyn voted against the Labour Party some 200 times during his time on the back-benches. However, you do not cite any of the issues he voted against e.g. going to war in Iraq, a vote which had the support of millions of UK citizens, I do not see that as being disloyal. What I do consider as disloyal is the actions of those weasly Labour Party MPs who, along with the support and approval of members such as youself, resent Mr Corbyn’s Leadership victories and have continuously spent their time sniping, bleating and plotting against him and his parliamentary supporters and dismissing the will of the majority of Labour Party members and supporters who voted for Jeremy Corbyn.

You say “I’m someone who came into politics because I don’t want to spend all of my time blaming someone else for our troubles”. That does not seem to have deterred you from blaming Mr Corbyn and his supporters for all the woes of the Labour Party. It would have been more honest if you had accepted the emphatic rejection of the other leadership candidates was entirely of their own doing i.e. they were so far out of touch with the grass root membership, they might just as well been on another planet. You complain; “CONVENTIONAL political wisdom (whatever that is) appears to be a thing of the past, pundits and polls are no longer to be trusted, the public are purposely misleading pollsters and canvassers, rules that govern acceptable behaviour, for candidates and campaigners, have been torn up and the Western World’s disdain for “experts” has become all too apparent”. Quite a lot of blaming going on there Gavin!
You claim to be a staunch member of the Labour Party, like a stick of rock it is embedded in your very being. That being so, I am astonished that you can only credit three past Conservative Leaders with social progress. I quote from your blog dated June 10th, 2016. “In one night, 100 years of social progress, forged by Churchill, Chamberlain and Thatcher, can be undone”. No mention is made of Labour Party social progressives/reformers such as Attlee, Gaitskell, Wilson and yes even, Blair. Maybe that is the reason why, as you say, some of your colleagues suggest you leave the Labour Party and join the Tories, a Party you seem to be more in tune with than the Labour Party.

In your blog dated 13th July, 2016 regarding the second Leadership contest you, predictably, rubbish Jeremy Corbyn. You then declare Mr Owen Smith to be a “credible” candidate; however, after Mr Smith was emphatically defeated you had this to say in your blog dated 24th September, 2016. “I am disappointed that Owen Smith fell short of being elected Leader of the Labour Party today. Like thousands of others, I think Owen would have made an outstanding Leader. He deserves great credit for the brave and courageous campaign that he fought in the face of severe and totally unjustifiable hostility from many on the opposing side”. I think it is a bit rich of you to complain about hostility when you have been publicly hostile to Mr Corbyn ever since he was elected Leader in 2015. I consider your hostility toward Mr Corbyn to also be unjustified. You then completely contradict yourself in your blog dated 29 December, 2016 regarding Owen Smith, I quote: “The Labour Leadership contest of 2016 threw up not one single candidate capable of winning a General Election”. Which is it, was Owen Smith potentially an “outstanding” leader or was he in reality a “no-hoper”?

If not Jeremy Corbyn, who are you looking too to lead the Labour Party, is it the gung-ho let’s bomb Syria Hilary Benn, or the wishy-washy sit on our thumbs until we see which way the wind is blowing Alan Johnson, or the arrogant I’m all right jack Chukka Amunna who, when asked if he would join strikers on a picket-line replied “I do not have a problem with my pay or conditions, my job is not under threat, why on earth would I want to join a picket-line”? A trio of blue-labourites as ever was.
You insult working class people who voted to leave the EU, not only in Thurrock and Basildon but nationwide, by likening them to “turkeys voting for Christmas” implying they simple-mindedly voted against their best interests and that of the Country. I believe most people were fully cognizant of what they were voting for , after all the question was simply put , should Britain leave or remain in the EU, no ifs or buts, no caveats, just a simple in or out vote on which the people delivered a considered verdict. For “remainers” to now claim that voters were ill-informed and therefore renders the result invalid gives me the impression that not only are they bad losers they are also hell-bent on sabotaging, in any way they can, a negotiated exit which is in the best interest of the people of Great Britain and Northern Ireland.

You complain that Mr Corbyn’s concern about the effect austerity has on the poor, the disadvantaged, the unemployed and those who struggle on low wages shows how out of touch he is with the “language” of the country and the public. On the contrary, I believe it is you and your kind who are in denial that there are people who are poor and struggling, even the Tories admit there are people who are “just about making it” (JAMs). The “language” you and others like you in the Labour Party espouse is “denial and indifference”. I doubt you have ever experienced poverty or had to struggle just to make ends meet. You quote Tony Blair; “The true believer believes in social justice, in solidarity, in help for those not able to help themselves. They know the race can’t just be to the swift and survival for the strong, But they also know that these values, gentle and compassionate as they are, have to be applied in a harsh (austere), uncompromising world and what makes the difference is not belief alone, but the raw courage to make it happen”. I believe Mr Corbyn is totally committed to making the sentiments expressed therein happen and possesses the raw courage to do so, despite the despicable efforts of the “Blue-Labour” MPs, supported by the likes of you, to bring him down. What are you offering, your mantra appears to be “progressive politics” what does that mean and who will it benefit?

You make no secret of the fact that you are a great admirer of Tony Blair and consider him the Labour Party’s greatest Prime Minister, you cite the fact that he won three consecutive General Elections as justification for that accolade. I remind you that Margaret Thatcher also won three consecutive GEs, do you consider her a great Prime Minister, and probably you do given your right wing leanings and your hatred of the left. It is not the winning that marks you out for “greatness” it is how you exercise the powers given you and what you do to the benefit of the UK and its peoples. I get the impression you would welcome him back as Leader of the Labour Party.
It would be ridiculous of me to claim that no good resulted from Mr Blair’s time as Prime Minister but I believe the magnitude and consequences of his mistakes far outweigh the good.

He is credited with bringing peace to Northern Ireland. He did so by appeasement, he appeased Gerry Adams and Martin McGuinness who, if not actual members, supported the IRA and condoned their killings. He sought to pacify them by satisfying their demands at the expense of the peaceful participants to the “Peace Agreement”.
His “bloodiest” mistake, for which he will forever be remembered, is Iraq. By tying himself to the coat-tails of President G.W. Bush he committed the UK to going to war in Iraq. Cllr Callaghan you bemoan the Western World’s “disdain for experts”, Tony Blair wilfully ignored the information given him by Dr Kelly, an expert on weapons of mass destruction, that Saddam Hussain did not possess such weapons. He persuaded Parliament to support his actions by deliberately misleading, some would say lying to, them on the issue of weapons of mass destruction and Saddam Hussain’s ability to launch them on the UK within 45 minutes. The consequence of Mr Blair’s rush to war in Iraq has been the loss of thousands of lives, not only British servicemen and women, but also men, women and children living in Iraq, plus thousands more suffering life-changing injuries, and the killing and maiming continues to this day. To add insult to injury Mr Blair is appointed “peace envoy” to the Middle East, that is akin to appointing Harold Shipman President of Help the Aged, After a decade as “peace envoy” he has achieved nothing and been well paid for it. Whilst millions of people , including children, are suffering horrors, that we can only imagine, due in large part to the gung-ho actions of Mr Blair, he has become a very wealthy man. Cllr Callaghan, this is the man you so much admire and sing his praises.

In my opinion and that of many others, especially those who have lost sons, daughters, brothers, sisters, husbands, wives, fathers, mothers, friends and loved ones, Mr Blair along with ex-President Bush should face trial for crimes against humanity.
Finally, if the Labour Party is “disintegrating” the blame lies, not with Jeremy Corbyn and those who support him, but with those Blue-Labour MPs and others like you who support and encourage their disloyalty. I think I have sussed what you mean by “progressive politics” it is nothing more than a very slightly watered down version of Conservatism.

You say you think the only place left to go is Mars. Make my day and board your rocket now and take with you Tony, Hilary, Alan, Chukka and all those other Blue-Labour MPs and Party members who are more in tune with the Conservative Party than the Labour Party. One more thing Gavin, please ensure the journey to Mars is one way only.

7 Responses to "Mr Perrin’s Blog: What did Tony Blair ever do for us?"