High tide along the Jaywick coastline has passed and we have seen no reports of flooding.

At its peak the rest centre at Clacton saw 230 residents from Jaywick having heeded the advice to leave their homes following warnings of the potential for severe flooding. No one attended the rest centre in West Mersea which will now close.

Essex Police Deputy Chief Constable Matthew Horne who oversaw the multi-agency operation this evening, Friday, January 13, said: “I am absolutely clear that the collective decision to evacuate residents in Jaywick and to provide a rest centre in West Mersea for people should it be required was the right thing to do.

“This decision was based on science and the expert advice from the Environment Agency and the Met Office. This will have been exactly what our counterparts along the east coast of the country will have been doing in order to come to similar decisions.

“We prepare for the worst case scenario and we would be happy to take the same decision again should we be faced with the same advice as we have had over the last 36 hours.”

Claire Beecroft, Environment Agency Duty Manager, said: “The recent weather has been combination of a gale force winds, high tides, dangerous waves and a coastal surge. The forecast indicated a genuine danger to life, and we issued a severe flood warning so the public can take action to protect themselves and their property. The unsettled weather will continue through Saturday, please take great care near the coast, and avoid walking along coastal paths and promenades.”

Tendring District Council will now coordinate efforts to ensure residents are able to safely return to their homes now the warnings have been downgraded by the Environment Agency. It is anticipated transport arranged through Essex County Council will be available to take people back home from 6am. Social Care staff will remain on hand to ensure frail, older and vulnerable residents are given all the necessary help to return home safely.

DCC Horne said: “I would like to thank residents for their cooperation and pay tribute to every single person who assisted with the evacuation effort. This was a significant task and it is only because of the professionalism and commitment of every person working together to ensure the safety of everyone that we were able to protect those most at risk.

“Our collective objective was to keep people safe. I am conscious this caused disruption for some but while the information suggested there was potentially a risk to people’s lives we was not prepared to take the chance that perhaps flood defences would be overtopped by the high tides and waves.” 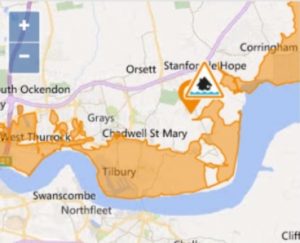 A FLOOD alert along the Thurrock coastline has been declared by the Environment Agency.

The coast line runs from Fobbing to Purfleet including Tilbury, Grays and the Dartford Crossing. It is ranked as “Flooding is possible, be prepared”.

A spokesperson said: “We are currently experiencing high tide levels on the Norfolk, Suffolk and Essex Coasts, this is due to a combination of spring tides and a tidal surge.

“The forecast wind direction is West North West. The forecast wind strength is force 6. mAODN is a standard measure used across the UK for height above average sea level. It is different to Chart Datum.

“The warning is in force until 3:30 am 14 January 2017. The Environment Agency is monitoring the situation closely, working alongside partners including the Met Office and local authorities.