Football: Cheek hat-trick dumps Rocks out of the cup 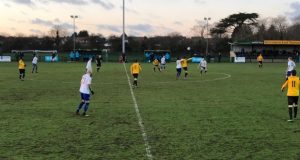 A MICHAEL Cheek hat-trick saw East Thurrock suffer a heavy defeat as they went out of the FA Trophy at Rookery Hill.

Both sides had a share of the early exchanges in the bright January sunshine. Both sides looked equally matched with Joe Ellul looking strong in defence and Sam Higgins lively up front.

You had the feeling that this could be about small margins and there were little unforced errors that crept into East Thurrock’s game as the half wore on. However, they played a high tempo game that was stretching Braintree.

Iron’s keeper Sam Beasant pulled off a great save from a Reece Harris strike as they continued to press.

Braintree started to get back into the game and although there were no outstanding chances, you felt it was just a matter of time. And so it was a Michael Cheek free kick in the 39th minute that sailed into the back of the net.

Things got worse just before half time for East Thurrock when a defensive lapse saw Michael Cheek (again) steal in to slot the ball home.

But soon after, East Thurrock got back in the game when Sam Higgins scored from the spot.

But this was a strong free running Braintree side and so it proved with the fourth goal in the 56th minute when their front men broke free, brought a great finger tip save from East Thurrock but only for Jack Midson to head home from close range.

Lee Barnard scored a fifth in the 75th minute. East Thurrock did not give up as their players continued to plug away until the final whistle. Sam Higgins scored a second in injury time.

There was another late goal by Sam Higgins but by then the game was lost.

East Thurrock will now regroup as they face Margate next Saturday at Rookery Hill.