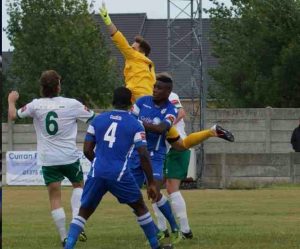 This defeat was a hard pill to swallow for all connected with Grays Athletic, after matching Wingate and Finchley they succumbed to a late goal and then suffered further when they hit the post in the very last minute.It was a much improved all round performance which deserved at least a point but as has happened so many times this season the winning goal was a result of a defensive error.

Manager Jamie Stuart made changes following last weeks defeat against Worthing with Terrell Forbes,Jamie Mascoll and Harry Watkins dropping to the bench ,Luke Wilson sustained an injury during the warm up and was replaced by Jordan lAghaste with Nathan Campbell partnering him in central defence,Etienne Kababola came into midfield and new loan signing Joe Payne coming in at left back and gave a polished performance for one so young.

A scrappy opening quarter of an hour saw little goalmouth action that was until Laney got the better of Ryan Mahal racing forward he cut inside to the edge of the box but failed to hit the target firing over.It was Blues ace marksman Kieron Bishop who had the next opportunity latching onto a through ball he fired in from an acute angle turned behind by keeper Gore.

Blues unlike last week were playing with more purpose this time closing down the opposition and as a consequence enjoyed a good deal of possession,Kababola looked lively and together with Joao Carlos their pace caused the visitors some anxious moments.

Laney came close for Wingate in the 21st minute a tantalising cross was played into the Blues box where he somehow acrobatically managed to flick the ball goal wards only to see it slide just wide with Amadou Tangara beaten.At the other end Blues did get the ball in the net only to be ruled out for offside.

As the half progressed there was very little to choose between the teams but it was WIngate who opened the scoring in the 37th minute. A Blues forward move deep into the visitors half broke down and with the midfield failing to push in behind Wingate won the important second ball, the ball was played forward quickly to Laney who easily outpaced the usually reliable Mahal and with a clear run on goal crashed the ball past Tangara.Just moments later he should have increased the visitors advantage unmarked in the six yard box he nodded the ball wide of the post.

Mahal seemed to be off the pace and to have sustained an injury he was replaced by Aaron Wickham .

The goal seemed to upset Blues rhythm and there followed a period of play where they failed to close down the opposition, passes were going astray so it was a great relief when the referee blew the half time whistle .

After some early Wingate pressure Blues started to play with real urgency,Kababola brought a good block save from Gore.Bishop then tested the keeper with a drive which he could only push out .Sub Jamie Mascoll playing in midfield sent a great ball to Kababola cutting inside he failed to trouble Gore his shot lacking power.

Eventually the pressure Blues were exerting paid off in the 68th minute, from one of many corners won in the second period the ball was swung in to the near post where Kwabena Osei was first to react powering a header past Gore.

The goal made for an interesting final period with two evenly matched teams searching for the winner,Wingate who had soaked up a lot of pressure early in the second period gradually got back into the game.McCall set off on a dangerous run bringing a good save from Taagara.

Chances came and went at either end and it looked increasingly like a draw would be the likely outcome but things changed in a dramatic final few minutes .Wingate exerted some late pressure Tangara made a good block from McCall at the expense of a corner.From the kick Blues keeper did well to punch the ball clear where it fell to Obafemi on the edge of the area his shot lacked power but appeared to deceive Taagara who allowed the ball to bounce between his legs and into the net.

The goal was a cruel blow for Blues who had looked good value for at least a point up to this stage and their frustration was compounded in the closing minute when a pile driver hit the Wingate post and rebounded to Campbell who put the ball over the upright but in his defence he had little time to react the ball coming at him at pace.

The defeat leaves Blues four points adrift at the bottom and with a difficult trip to Enfield on Saturday they must get some sort of result to ensure the gap between them and the teams above becomes too large.