More than 400 fined for littering in Thurrock 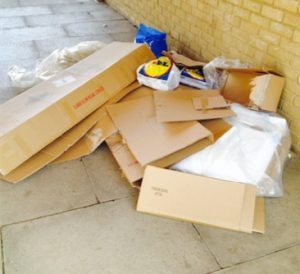 LEADER of Thurrock Council, Cllr Rob Gledhill, has given an update on how many Fixed Penalty Notices (FPNs) have been issued for littering and dog fouling between 5 December and 6 January.

At Wednesday’s Cabinet meeting (11 January), Cllr Gledhill, told councillors that 418 FPNs had been issued totalling £31,350 – which will be used to fund the enforcement service. Almost £17,000 has already been received.

Cllr Gledhill said: “This is a significant number but the message is getting out there – it is not acceptable to litter.”

Speaking after the meeting, Cllr Gledhill said: “The public are telling us they are seeing a difference – the appearance of the borough has improved since the Clean it, Cut it, Fill it campaign has been in place and the enforcement officers have been patrolling Thurrock.

“As I have said before, if you deliberately litter the roads and footways of Thurrock, you will face a fine – don’t pay that fine and you will face the magistrates”

He also reminded people enforcement officers are also targeting those who do not clean up after their dogs.

Cllr Gledhill added: “Predominately, the FPNs which have been issued so far are for littering – but they are also there to tackle dog fouling.

“My message to the small percentage of dog owners who fail to clean up after their dogs is clear – these are our paths, our parks and our streets, you should not be leaving your dog’s mess in public places. Either pick it up and bin it or get a ticket..”

Portfolio Holder for Environment, Cllr Pauline Tolson, said: “With more than 500 bins around Thurrock, there really is no excuse for spoiling our borough.

“This is a new resource dedicated to enforcing against litter and dog fouling, so we have seen a steep rise in the number of FPNs issued.

“The total fines paid already totals £16,875. Offenders are given 14 days to pay and while the scheme is still in its infancy, a large number of recent tickets are early in the process so we wouldn’t expect payment yet.

“But we are very clear, those who choose to not pay will face prosecution.”

One Response to "More than 400 fined for littering in Thurrock"