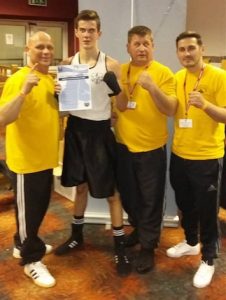 CHADWELL St Mary Amateur Boxing Club’s Kieran Desmond, 17 years U52 kg having already this season reached the National Association Of Boys & Girls Clubs Final, has boxed his way through to the national youth championship finals. Being held over 3 days at The Magna Centre, Rotherham, Sheffield

Chadwell St Mary ABC would like to congratulate both boxers on their performances in an elite competition contesting of 3 x 3 minute rounds, and wish Desmond the best of luck for the finals