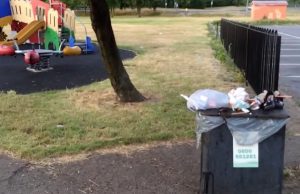 ENFORCEMENT officers in Thurrock have issued 1,000 fines for littering the borough, as part of the council’s clean it, cut it, fill it initiative.

On 5 December 2016, officers began ticketing people for dropping litter in the borough and at 1.36pm on Tuesday 28 March, the 1,000th Fixed Penalty Notice (FPN) was issued.

Cllr Rob Gledhill, Leader of the Council, said: “This is an unfortunate milestone in our campaign to keep the borough clean.

“This clearly shows we will not be a soft touch when it comes to those who selfishly want to spoil Thurrock.

“While we have of course focused on places where lots of people visit, I am pleased that our officers have been patrolling the length and breadth of the borough.”

Portfolio Holder for Environment, Cllr Pauline Tolson, said: “In an ideal world, we would prefer to not have to issue FPNs, because people would put their rubbish in the bins – where it belongs.

“But until then, we will continue to take robust action against those spoiling the borough.”

To find out more about the clean it, cut it, fill it initiative and the Love Thurrock campaign, visit thurrock.gov.uk/lovethurrock