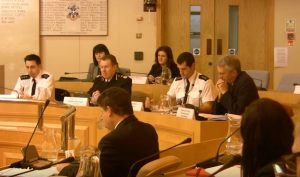 POLICE and Crime Commissioner for Essex, Roger Hirst has extended the contract of the current Chief Constable of Essex, Stephen Kavanagh, for a further four years.

Mr Hirst said “The Chief Constable has shown strong, positive leadership over the last four years and has led the service through a number of significant changes to help modernize and improve how they operate. This has led to better treatment for victims of crime and stronger capabilities in terms of tackling online crime and organised crime.

“Today, under the Chief Constable’s leadership, Essex Police are one of the most improved forces in the country and I look forward to working together over the coming years to continue our ongoing improvement and modernisation of the service.”

“I have heard consistently over the last year the demand from people across our country for greater local, visible and accessible policing. This is now a key priority in our Police and Crime Plan and a key focus for both the Chief Constable and myself over the coming years.”

Mr Kavanagh was brought up in Essex and comes from a policing family. He was first appointed as Essex Chief Constable on May 3, 2013 following a successful and high profile career in the Metropolitan Police Service.

The decision to extend the Chief Constable’s contract will now be presented at the next Police and Crime Panel meeting on 1 June.

Mr Kavanagh, said “I have been massively proud to lead every one of this force’s dedicated officers and staff over the past four years and it is a privilege to be asked to continue to be Chief Constable.

“I don’t underestimate the challenges policing holds in the future but we won’t shy away from them. I will, along with the rest of the force, meet these head on with the interests of the public at the forefront of every action.

“Criminals coming here to commit crime will be met with force and victims will be treated with compassion. I commit to remain open and honest, putting vulnerable people and the welfare of police officers first.”