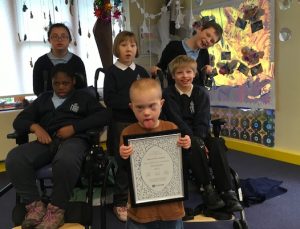 “Everyone at Beacon Hill is thrilled that we have been awarded the Artsmark Platinum award,” says Head Teacher Sue Hewitt. “The majority of students at the school are sensory learners so the Arts provide a really important medium for much of our work. This award recognises the creativity and enthusiasm of all our team, both staff and students.”

Amanda Bradley, who is the school’s Cultural Champion, said “I was delighted to receive the news that Beacon Hill had been awarded the Platinum Artsmark award. We are very lucky at Beacon Hill to have such enthusiastic and creative staff and students and the award is a testament to all their hard work.”

Artsmark supports schools in embedding arts and culture into every student’s life and learning. The Artsmark award celebrates schools that champion the arts and strive for excellence in their provision. Artsmark supports schools in evaluating their arts offers and helps them to harness the power of the arts in developing confident, creative and resilient young people. 72% of all schools in Thurrock are registered for Artsmark. This compares to just 11% of all schools nationally. Thurrock is second only to Hull in the commitment of schools to Artsmark, meaning that the arts are genuinely embedded in the curriculum.

In 2016, it was estimated that the creative industries were worth £84 billion to the UK economy. By ensuring young people across Thurrock have access to diverse and rich cultural experiences, Royal Opera House Thurrock Trailblazer and Artsmark are preparing them to be the next generation of creatives.

Sally Manser, Head of the Royal Opera House Bridge programme which supports Artsmark, said: “Achieving these awards is great news and shows what happens when a group of schools come together and make a long term commitment to strengthening cultural learning for children and young people”

To find out more about the Royal Opera House and Artsmark please go to www.roh.org.uk/learning/royal-opera-house-bridge/artsmark.