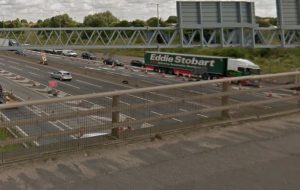 ESSEX Police are appealing for information after a man was assaulted in what is believed to be a hate crime in South Ockendon.

The men attacked the victim; kicking him to his leg and trying to him force him over the railings onto the motorway below before throwing him to the floor and kicking him in the ribs.

The attackers then got back into the car and made off.

The men are all described as ‘Asian’ and the vehicle was dark in colour.

The victim, who suffered bruising to his leg and ribs and cuts to his knees, believes this was a racially aggravated attack and he was assaulted because he was white.

Anyone with any information about the incident or saw a dark coloured vehicle around the area at the time is asked to contact Dc Mark Cotgrove at Grays police station on 101 or Crimestoppers anonymously on 0800 555 111.