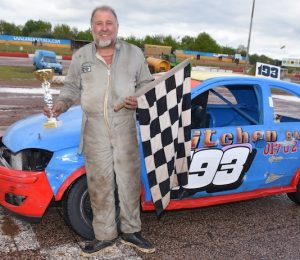 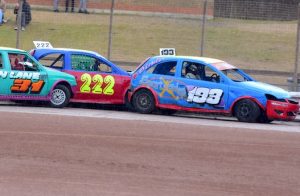 A DAY that started disastrously for Andy Taylor, was turned around in dramatic style as the Canvey Island driver grabbed a dramatic last corner victory in the Stock Rod final at Arena Essex on Bank Holiday Monday.

Taylor was amongst the leading group of cars as the heavens opened after just a few laps of the first heat of the day. The sudden nature of the downpour saw car after car skate off into the barrier all within seconds of each other, with Jon Turvey, Carl Steptoe and Ian Jardine all receiving major damage which spelt an end to their day. Taylor and Carl Shackleford received damage in the pile up, but were able to subsequently repair, whilst other cars spun and narrowly avoided disaster. Track Champion, David Crouch, won the restarted heat whilst a three wide moment spelt retirement for Alex Martin, who punctured a tyre.

Wayne Shackleford won the second heat before the final saw Dan Phillips race into what appeared to be an unassailable lead. Taylor steadfastly held onto second place under extreme pressure from Wayne and Carl Shackleford and all three caught Phillips with a lap to run. Phillips drifted wide on the exit of the penultimate turn and Taylor pounced with all four cars nearly falling over each other on the last bend. Behind Taylor, Carl Shackleford grabbed second from Phillips.

“What a great finish” Taylor said after the event “I couldn’t believe it when the gap opened.” and what was his view of the earlier crash “I could see the rain coming and on the previous corner it had got a bit slippy, but there was no grip at all on turn one and I knew we were all going in! I just thought… here we go!”

Elsewhere, the PRI Bangers saw Stanford Le Hope’s Danny Mitchell take two accomplished victories, as did Grays Tommy Harding. The Destruction Derby saw a huge fire break out in the Dan Nicholls car. Despite several fire extinguishers being emptied on it, it was still smouldering as the Derby was completed on the pit turn. Tom Greenstreet was adjudged to have avoided contact in the earlier stages of the Destruction Derby so was disqualified, allowing Aaron Harris to take the win as last car running.

A great entry of Lightning Rods saw heat wins for Paul Strawson and the rapid Anthony Lawrence. Lawrence was by far the fastest driver on the day but he spent a little too much time getting round Jim Heard in the final, allowing Dan Guidotti to race to the win on his return to the class. Lawrence and Heard filled out the podium.

David Shearing was dominant in the Mini Stox, winning all three races easily and moving to the top of the points table overtaking the absent Charlie Morphey.