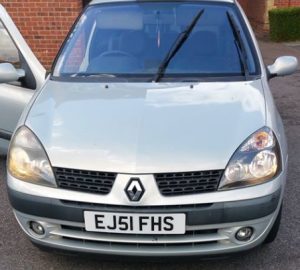 CAN you help Essex Police trace the driver of a car which struck another vehicle, containing a young baby and its mother, before fleeing.

Officers were carrying out stop checks in the Galleon Road area of Chafford Hundred at 11.30am on Wednesday May 2 when the incident happened.

On spotting the officers the driver of a silver Clio reversed out of the Galleon Road junction at speed striking a red Peugeot being driven by a young mum and containing her 11-month-old baby boy.

The occupants of the Clio, believed to be two men, then fled the scene. Fortunately the mum and her baby son were not injured

The Clio was searched by officers and drugs and mobile phones were found inside.

Witnesses to the incident or anyone with information can contact DS Fitzmaurice at the West Operation Raptor team on 101 or Crimestoppers anonymously on 0800 555 111.