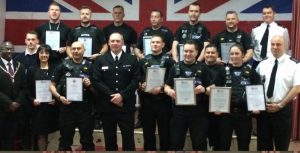 ON Friday 28th April 2017 an awards ceremony was held in Tyrells Hall, Grays. The ceremony was aimed at inviting members of the public to watch officers receive recognition for going above and beyond the normal call of duty to help and protect the public they serve.

The event was opened by Chief Superintendent Trevor Roe, with a thank you to everyone for attending the event and an introduction about what the event hoped to achieve and the importance of celebrating exceptional work and dedication.

Superintendent Andrew Mariner echoed this sentiment, stating how important it is for members of the public to be a part of the event and to have the opportunity to hear the great work performed by their local officers.

Deputy Mayor Tunde Ojetola also gave an impromptu speech about his pride in the work carried out by Essex Police Officers and Staff.

Constables Stuart Mackinnon and Adam Anderson were awarded a Command Team Certificate for safely tackling, controlling and arresting a violent wanted male who lunged at them in pitch darkness while they searched a flooded house.  Unfortunately they were at court and therefore unable to attend, but their achievement was applauded nonetheless.

Sergeant Paul Haggis and Constable Sean Alder-Boral were awarded a Chief Constable’s Certificate of Merit for their professionalism whilst administering mouth to mouth resuscitation and emergency first aid in an attempt to save a child’s life.

Constables Ryan Dean and Kelly Adams were awarded a Command Team Certificate for their professionalism when they forced entry to a seriously ill man’s house and administering mouth to mouth resuscitation and emergency first aid in an attempt to save his life.

Sergeant Scott Fitzmaurice and Constables Emma Ridings, Barry Wakeling and Patrick Bowes were awarded Command Team Certificates for finding and arresting a suspect for two stabbings, who they believed to be in possession of a noxious substance. Once arrested he was also found to be in possession of drugs which he intended on selling.

Detective Constable Charlotte Taylor-Stevens was awarded a Command Team Certificate for her excellent investigation into a deliberate road collision on the Dartford River Crossing which resulted in serious injury and trauma to those involved. The driver responsible will be going to Crown Court shortly.

Police Constable Terry Saint was awarded a Chief Constable’s Commendation for his bravery when arresting a male, who lunged at him with a large knife and threatened to kill him. Pc Saint and colleagues used shields, batons and incapacitate spray to gain control of this male and arrest him without injury.

Sergeant Paul Haggis was awarded a Command Team Certificate for his brave actions when attempting to save the life of a seriously burnt man. He managed to remove him from the burning house and administer first aid.

Constables Emma Ridings, Paul Harrison, Chris Knight and James Gray were awarded a Command Team Certificate for arresting a male who was in possession of a knife and threatening to harm the officers and himself.

We would like to take this opportunity to thank Tyrells Hall for allowing us to use of their venue, and for their kind assistance on the day, and to also thank Asda Stores in Tilbury for providing a beautiful selection of food and drink for everyone in attendance.